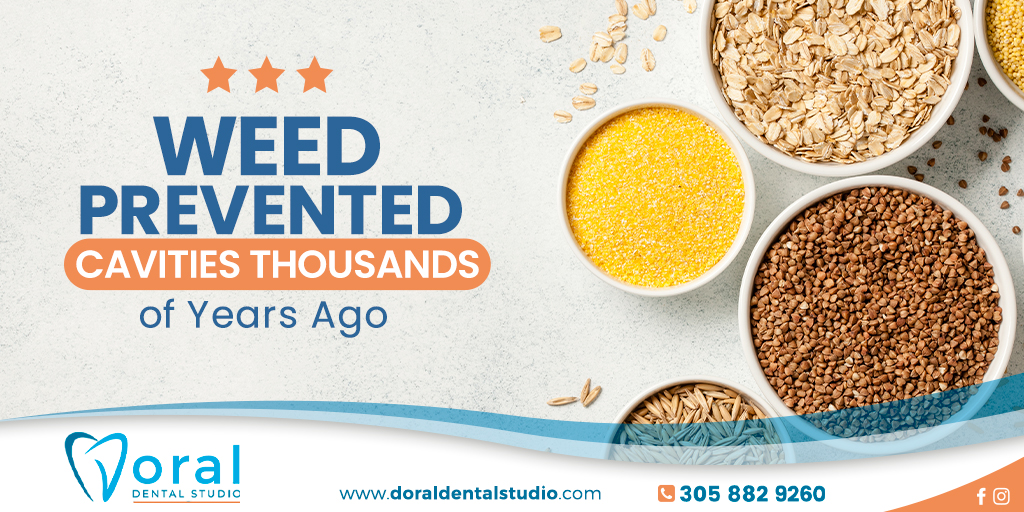 While minty toothpaste is the norm today, ancient people had to get creative when it came to keeping their teeth clean. Some civilizations used abrasive ingredients like burnt eggshells and ox hoof ashes to scrub their teeth. But others turned to a natural, herbal solution to keep their teeth healthy. It was a weed with a distinctive smell…but likely not the “weed” you’re thinking of. It’s called purple nutsedge.

The transition from a hunter-gatherer diet to grains

It turns out that early humans didn’t have to deal with tooth decay due to their meat-heavy, hunter-gatherer diet (This is where your Paleo diet friends can chime in with their I-told-you-so chorus). It wasn’t until the advent of farming and the introduction of a much more grain-based diet that tooth decay became a serious issue.

However, in one area of post-agricultural, ancient Sudan, the problem of tooth decay was nonexistent. A team of researchers scoured the cemetery of Al Khiday 2, a burial site that dates back roughly 2,000. They discovered that, of the remains buried there, fewer than one percent showed signs of tooth decay, including cavities.

Upon further investigation, the researchers discovered that many entombed in the cemetery had feasted on purple nutsedge, a weed that still grows prevalently within the area. And it truly is a weed in every sense–once this menace gets in your garden, it’s very hardy and tough to eradicate. For the purposes of oral health, however, eating and digesting this plant drastically reduces bacteria growth within the mouth, limiting tooth decay.

While it’s impossible to know for sure whether purple nutsedge is the only reason these ancient humans escaped painful cavities and other oral health problems, it likely played a big factor. It’s not tasty to eat and it has a very pungent odor, but scientists believe the tubers of this plant were often consumed for general medicinal purposes, and we all know medicine typically doesn’t taste good.

So you may be wondering if this weed can still work to protect teeth today. Maybe the key to healthy teeth is as simple as growing your own purple nutsedge? Well, it still contains those same bacteria-fighting properties, but the human diet has changed drastically.

In particular, we consume far more sugar today than we did even a century ago. With this drastic increase, it is difficult to say how effective purple nutsedge would be in reducing cavity risk, especially for those not living on a strict Paleo diet. Plus, modern toothpaste does a pretty good job of cleaning and protecting your teeth, while giving you a fresh, minty taste. So skip the stinky weed and stick with your trusty fluoride-based paste and floss to keep your teeth clean and healthy.